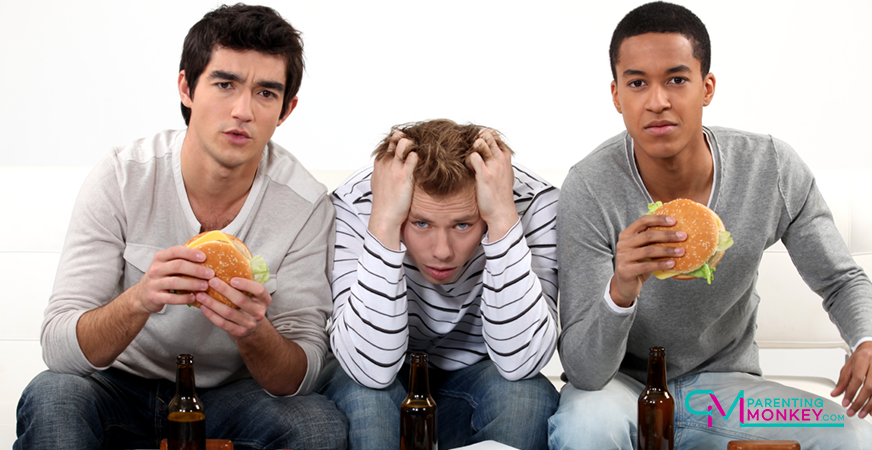 Have your teenager’s eating habits changed?

This is very normal since children’s eating habits tend to change when they get to puberty.

Teenagers love to experiment with food, but they don’t often make healthy choices. Your job as a parent is to check such behaviors and to inculcate a culture of healthy eating in your children.

But sometimes teenager most parents usually don’t know what to do or how to react when teenagers develop unhealthy eating habits.

As your teenage boy or girl continues to grow and develop, their eating habits will start to change. Teenagers tend to eat more than their parents or older family members.

This is only natural. During puberty, your teenager will grow and develop more than any other stage in their life. All this growth and development will require nutrients.

Usually, a change in your child’s eating habits should not worry you. But sometimes the change in eating habits is caused by something other than nutritional demands during puberty.

For example, may start more fatty and sugary foods and fewer fruits and vegetables. There could be many reasons for this change, but the most common cause of change in eating habits is peer pressure.

According to experts, lunch hour is also a social hour—every kid wants to fit in at the lunch table. They will tend to eat what everyone else is eating, which is mostly junk food.

Teenagers are also very conscious about how they look, and they will starve themselves regularly for fear of gaining weight. Although such influences may seem subtle and sometimes harmless, they have the potential to degenerate into eating disorders.

What are eating disorders?

They are mental illnesses that lead to severe disturbances to your child’s eating behaviors. Although the illnesses are common in girls than boys, they can affect either gender. They include:

It is an extreme fear of gaining weight which will make your child obsessed with losing weight through calorie controlled diets fasting, rigidly selecting food and sometimes exercising compulsively.

Trending Now:  Teen hygiene and how to talk about keeping clean

People with anorexia may also experience dysmorphia, a condition that makes them have a distorted view of their build. They will assume they are bigger than they really are.

It is also characterized by fear of gaining weight. Kids who have Bulimia will binge eat. They will consume large amounts of junk food and try to purge it by self-induced vomiting, laxatives, fasting or compulsive exercising.

It is similar to Bulimia. The kid will eat a lot of food but will not try to purge it with behavior such as vomiting or calorie restriction.

You will not find a single guidebook on how to tell whether your child is dealing with food disorders. Food disorders usually thrive on secrecy, and many teenagers will not even know they are struggling with a mental illness.

Here are various warning signs you can look out for:-

Such acts may include cutting food into small pieces or arranging food in particular patterns. Other rituals may involve eating foods in a specific order or using the same utensils every time.

Excessive use of condiments.

For example, if your kid is using way too much salt, spices or mustard in their food, it could be a sign of food disorder.

If your teen is suddenly obsessing over their body size and weight, it could be a warning sign that they have an eating disorder.

A dramatic change in eating habits should also be a red flag. For example, your teen can suddenly decide they are vegetarians or is no longer eating carbs for no good reason.

Watch out whenever your teen tells you that they will eat breakfast at school or they already ate lunch at their friend’s house. This could just be another tactic to avoid eating.

Going to the bathroom after meals

Notice if your child excuses themselves right after dinner to go to the bathroom. They may be secretly throwing up the food they just ate to reduce their calorie intake.

What to do after noticing strange patterns

If you see that your child dealing with eating disorders, you should help them get professional help as soon as possible. Do not blame yourself. Instead, be an ally and source of support for your child.

Some parents might be tempted to confront their kids directly about the problem. Desist from feeding such impulses. You will do more harm than good.

According to research done by the University of Minnesota, kids whose parents addressed their weight problems directly had a higher chance of taking up unhealthy eating behaviors.

Trending Now:  How To Tell If Your Teenager Is Doing Drugs And What To Do About It

Kids whose parents focused on healthy eating habits instead of being judgmental about weight changes had lower chances of developing eating disorders.

How can you assist your child to develop good eating habits?

One of the most effective ways to enforce your teen’s healthy eating habits is by being a role model. Children learn from watching what we do but not what we say.
Show your child that you care about healthy eating by always eating breakfast and going for the healthier food options whenever you’re food shopping or eating away from home. Enjoying healthy meals together as a family can help reinforce healthy eating habits.

How you talk about food can influence your child’s eating habits. Instead of talking endlessly about the effects of unhealthy eating, focus on all the good things about healthy eating.

Encourage your child to make healthy choices by emphasizing immediate benefits of healthy foods such as improving sports performance and helping with concentration. Such information is more meaningful than talking about long-term health risks.

Don’t restrict food by labeling them as bad. Teenagers are rebellious and will always want to taste the forbidden.

So, instead, aim at striking a balance. Eat healthy foods as many times as possible, but sneak in “sometimes” food now and then.

If you create a healthy food environment at home, it will be easier for your teen to make healthier choices.

Reduce the amount of unhealthy food in the house and increase the healthy food. Keep a bowl of fruit close by. Keep a loaf of wholegrain bread in the freezer and some chopped veggies in the fridge.

Involve your kid in the planning and preparation of healthy foods. Ask them to help out with the shopping or to prepare a healthy meal a week at least. If the child feels part of the process, they will be more likely to eat whatever you make.

It is normal for teenagers to change eating habits when going through puberty. At this stage, they are influenced by many factors including peer pressure and they might not always make the healthiest decision.

You should aim at inculcating a healthy eating culture in your child by being a good role-model, talking about healthy food and creating a healthy environment around the house.

Do you have any burning questions about or related to our topic? We would love to hear from you. Feel free to leave a comment below.