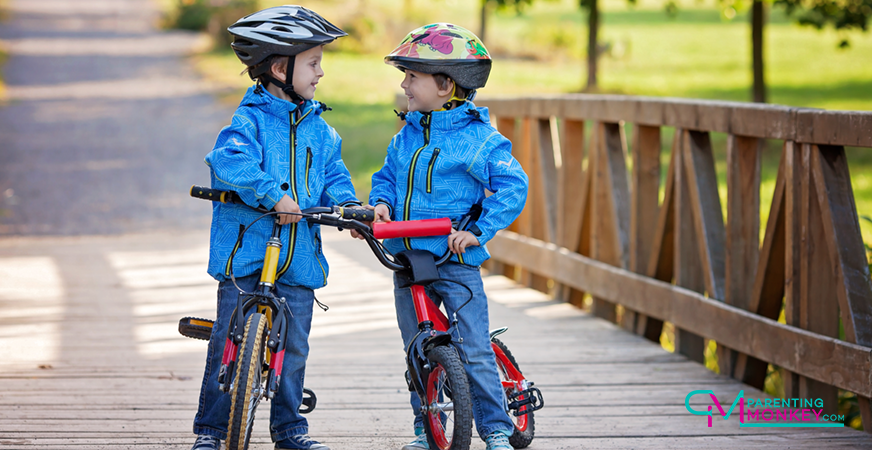 Spend much time on an urban sidewalk, and you’ll probably spot plenty of tots scooting around on balance bikes. You might wonder, “Where have all the tricycles gone?”

As a more natural way to learn to ride, balance bikes are overtaking trikes and training-wheeled bikes. Check out this brief history of the balance bike to learn why.

What is a balance bike? Quite simply, it’s a bicycle with no drivetrain or pedals.

With one wheel in front and another behind it, it certainly looks like a bicycle, but you propel it by moving your feet along the ground instead of by pedaling.

As children experiment with walking, running and gliding with their balance bikes, they get a feel for how to maneuver on two wheels. The transition to a standard pedal bike, thus, becomes easier.

In this video from Cycling UK, you can learn tips for helping your child use a balance bike.

Riders used their feet to propel them forward at then-unheard-of speeds for foot-powered transportation; speeds of over 12 kilometers an hour were recorded.

Get a feel for the look of this early precursor to the modern bicycle in the video “A Modern Day Draisine: The First Bicycle.”

Over safety concerns about its use on busy city sidewalks, this invention faded from the scene a few years after reaching its pique popularity. However, the basic concept was improved upon until it evolved into–and was replaced by–the modern bicycle.

A Recent Return to Popularity

So how come this centuries-old invention is all the rage among the toddler crowd today? Thank father Ryan McFarland, who took apart a child-size bike to make it manageable for his two-year-old.

In 2007, McFarland used his idea to found Strider Bikes, a US-based company dedicated to making balance bikes. Within 7 years, the company had sold almost 700,000 balance bikes; by 2017, that figure was up to 1.6 million bikes.

An Assortment of Models on the Market

Some parents may wonder if they can create their own balance bikes in the same way that McFarland did: by removing the pedals and drivetrain from a standard child’s bicycle.

You can, but it’s worth keeping in mind that actual balance bikes are usually designed with lightweight frames, convenient proportions, and toddler-friendly features. Genuine balance bikes are just plain better for the job.

Fortunately, there are plenty of them on the market these days–from Strider and other companies.

The product responsible for the rebirth of the balance bike–the Strider Bike–has a metal frame that resembles a standard bicycle. So, too, do many of the other products on the market.

This includes bikes from companies that sell only balance products, such as Cruzee. FirstBIKE products look like traditional bikes but are made of composite material.

Other traditional-looking balance bikes come from major manufacturers of bicycles and other riding gear. This includes the Radio Flyer Glide N Go and the Burley MyKick.

If you want a product whose design channels the idea of balance bikes being the natural way for kids to learn to ride, consider a wooden balance bike.

The leader in this segment is the Skuut from Diggin’ Active. Zum and Kinderfeets make other options.

As a parent, you may be committed to seeking out quality American-made products for your children. Unfortunately, when it comes to balance bikes, that designation is difficult to find.

Even most American-based balance bike companies do not manufacture their bikes in the USA. For example, Strider Bikes is headquartered in South Dakota, but the products are made in Asia.

However, there is one company offering wooden balance bikes that are made in the USA: Rolli-coaster. Each bike is made to order, so plan ahead when shopping for your child.

Are you sold yet on the idea of a balance bike for the youngsters in your life?

Balance bikes use the simplified design of the Draisine, a precursor to the modern bicycle, to help kids get a feel for balancing on two wheels.  Read our main guide and reviews.

In the comments, please ask questions or tell us about your experience with balance bikes.